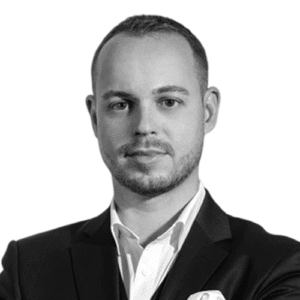 Tobias Adler, 36, CEO of Iron Eagle Capital and a Founder of nuco.cloud

How did you get into nuco?
In 2012 I developed a trading robot, a so-called Expert Advisor, for automated stock exchange trading. For back testing, i.e. testing the best working configuration, I needed a lot of computing power. No solution was either practical or simply too expensive. Then I came across BOINC together with Matthias Klees and after a legal examination regarding copyright and usability we decided to build nuco.cloud based on BOINC. That is to say to create a commercial and above all user-friendly version of BOINC. The nuco.cloud.

Describe nuco in a maximum of five words.
Car sharing but for computing power.

What are you responsible for at nuco cloud?
I’m the founder and CEO.

Why did you decide to found nuco.cloud?
I developed an expert advisor for stock exchange trading and needed an enormous amount of computing power for the back tests. Unfortunately, no existing solution was satisfactory or simply too expensive. I thought to myself that other people must feel the same way. but since everybody has a computer or a smartphone, but only uses them to a fraction, the idea arose to bundle this unused computing power and pass it on to customers at reasonable prices. Similar to car sharing, but for computing power. In short, we turned a problem into a solution.

What connects you to the blockchain world?
I already became aware of Crypto and Blockchain in 2012. I told my friends in 2013 that this will be the future. Of course nobody believed me, because it was just too new. At that time the BTC price was still around 60 USD. What happened after that is history.

How do you feel about the current status of cloud computing?
Almost every company needs computing power, no matter for what purpose. Some more, some less. I think that the demand will increase significantly in the future. There’s Moore’s Law that the processing power of computers doubles every few years. But as current manufacturing technology is slowly but surely reaching its limits and quantum computers are still dreams of the future, other solutions are needed in the meantime. And they have to be affordable. Examples of this are cloud gaming, where computer games are calculated externally and are only output on the gamer’s PC. In this way, the gamer saves the expenses he has every 1-2 years for a new gaming PC. The same principle can be applied to commercial applications like data analysis etc. This is exactly where nuco.cloud and nuco.compute come in. At nuco.cloud the unused computing power of many thousands of computers, smartphones etc. is bundled and forwarded to the customer. With nuco.compute, on the other hand, the computing power comes from professional data centers with more filter options for the customer. By using already existing hardware, enormous resources can be saved, which would have to be used for the production of new hardware.

Why would you recommend others to work with nuco.cloud?
Because our project will change the cloud computing world forever.

What is your vision for nuco?
To make computing power affordable for everyone, to give everyone the opportunity to monetize their unused computing power and thereby relieve the environment because less resources have to be used for new hardware on the one hand and on the other hand to enable projects that would otherwise not be possible because computing power is too expensive.

Which projects do you wish to see supported by nuco’s donations?
Sustainable projects, research in general and research projects that require an enormous amount of computing power, such as modelling for vaccines and drugs against diseases, like Covid19. For this reason we have founded our Covid19 joint venture together with Cudo, Bitkern, Hetzner Online and E-Shelter.